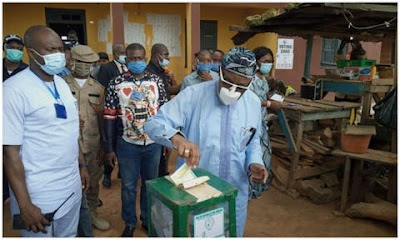 According to the results which was announced by Prof Yomi Dinakin, the chairman of the ODIEC, the ruling All Progressives Congress won all the chairmanship seats in the election which was held last Saturday across the 18 local governments in the state.

The ADC in Ondo West and Ondo East Local Government Areas of the state have called for the cancellation of the results in the two local governments over alleged massive electoral malpractices.

Pastor Oladimeji Owolabi, the chairman of the party while speaking with journalists in Ondo town on Monday, alleged that the election was characterised by irregularities.

He said, “It is on records that the election materials meant for wards like 4,5,6, and 13 were diverted to the houses of APC leaders for multiple thumbprinting, therefore, our electorate were totally disenfranchised.

“There were too many cases of multiple thumbprinting in the just concluded council poll in Ondo West Local Government Area and there is a need to cancel the election.”

Mr. Ade Adetimehin, who is the State Chairman of the APC, denied the involvement of his party members in alleged violence and malpractices in the election.

Mr Tee–Leo Ikoro, the state Police Public Relations Officer, has also said the men of the command were not involved in the election malpractices.