Osagie Ize-Iyamu, the governorship candidate of the All Progressive Congress, APC, while speaking during a press conference in Benin City, the Edo State Capital, denied the party's alleged Involvement In violence at the Edo PDP rally.

Ize-Iyamu stressed that his party has no reason to encourage violence, and that the party’s campaign across the state has been generally peaceful. He also revealed that the party is confident of winning.

According to Ize-Iyamu, “We heard of so much violence during the PDP rally in Etsako-West and they are accusing us of the destruction and shooting, saying APC is causing trouble.

“We did not go near their activities, we did not destroy any of their billboards and have no hands in any of the violence that took place at their rally.

“We don’t believe in violence and have no intention to encourage our members to be violent,” the APC candidate said.

The candidate also called on law enforcement agencies to put in more effort in bring the perpetrators of electoral violence to book.

This briefing comes two days after armed thugs purportedly stormed the venue of the PDP campaign in Apana community which is located in Etsako West Local Government Area of the state.

It was reported that security operatives were able to disperse the thugs to enable the PDP conduct its rally, no life was lost via the incident. 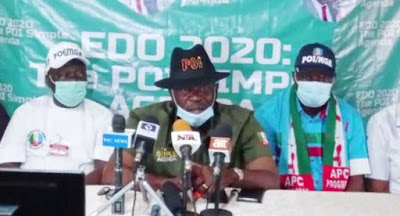