Comments Okorocha Made Before Imo Election That Uzodinma May Never Forget

Comments Okorocha Made Before Imo Election That Uzodinma May Never Forget 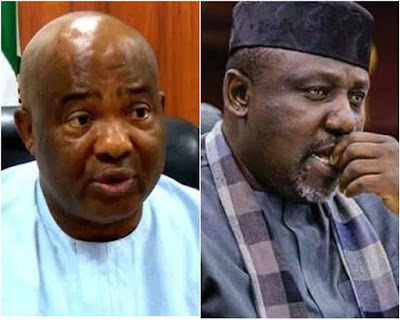 Remember that during the 2019 state elections, the Imo State candidate of the Peoples Democratic Party (PDP), Emeka Ihedioha, was declared the winner and governor-elect of the state by the Returning Officer for the election, Professor Francis Ogbonnaya Otunta,

Ihedioha, who is a former Deputy Speaker of the House of Assembly, secured a total of 273,404 votes in the election to defeat other candidates which included, Senator Hope Uzodinma of the All Progressives Congress (APC) and Uche Nwosu of the Action Alliance (AA).

on the 14th of 2020, The Supreme Court nullified Ihedioha’s election as governor and declared Hope Uzodinma of the All Progressive Congress (APC) , as the winner of the March 9 governorship election in the state.

Before the elections, Rochas Okorocha made some comments regarding the the candidate of the APC. In an article by Vanguard titled, “It is going to be easy to market Buhari but not Uzodinma – Okorocha”, the former Imo State governor, Rochas Okorocha, via a statement by his Chief Press Secretary, Sam Onwuemeodo, stated that it would be difficult for him to convince Imo people to vote for Senator Hope Uzodimma, who was the governorship candidate of his party, the All progressives Congress, APC.

The statement was in reaction to the report that Okorocha would be sanctioned for not supporting Uzodimma’s candidature.

Another point to note from the statement was that, according to Okorocha, Uzodimma was suffering from “self inflicted problems.”

According to Okorocha “The major problem Chief Uzodinma has is self-inflicted. Imo people who are going to vote on Election Day know him and he has the choking problem of how to convince them to vote for him to become their governor.

“The latest story on the APC Candidate is that he has been banned from travelling out over allegation of treasury looting. It was not Okorocha who slammed the travel ban on him.

In recent news, the seat for Imo North was declared vacant after the sudden death of Senator Benjamin Uwajumoju. Due to the the upcoming reelection in the region, the two members of the All Progressive Congress, APC, Governor Uzodinma and Okorocha seem to have different interests and support different factions of the party.

Don't forget to follow us on social media to get updated with recent happenings.