The Edo State Chapter of the All Progressives Congress (APC) has accused the governor of Edo State and the candidate of the People's Democratic Party PDP, governor Godwin Obaseki of ordering the deployment of over 50 police officers to Okpella community to intimidate people.

This was contained in a statement signed by John Mayaki, the Chairman of State APC Media Campaign Council on Wednesday, alleging that the Police were occupying the private residence of a political appointee of the Governor.

He stressed that this recent development will cause scare among residents ahead of the Edo State September 19 governorship election. 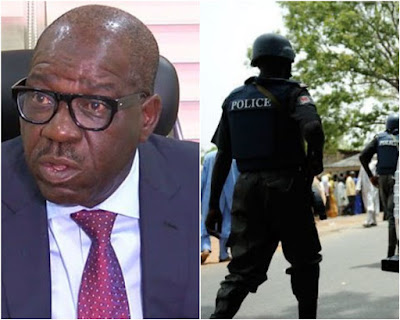 “The Police officers were reportedly deployed on the orders of the Governor Godwin Obaseki and have set camp in the building of one Lukman Akemokue, a political aide and ally of the Deputy Governor, who relocated his mother from the building to make room for the officers,” he said.

He also added that, the governor's actions has been interpreted as a desperate tactic to scare away voters during election.

The chairman urged the people of Edo state to cooperate with men of security agencies and assist with information at important times so as to ensure that the forthcoming election is peaceful, free and fair.