Godwin Obaseki on the 12th of November, 2016 started his political journey at Dennis Osadebey Avenue, the Edo State seat of power. 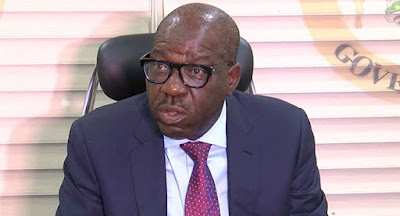 But the Governor have taken on another journey to achieve a total of eight years in office if he succeeds in the forthcoming September 19 gubernatorial election by the Independent National Electoral Commission (INEC).

Obaseki, has always put his mind on people-oriented policies and programmes since his assumption of office, these programmes would not only put smiles on the faces of the teeming populace but also stand the test oftime.

the governor in order to achieve his mission, initiated several reforms to fast track socio-economic development and transform the state to serve as a benchmark to other states across the nation.

Alaghodaro, is a Bini slogan that connotes progress, brings to light the state’s investment potential in its development plan and creates a platform for experts, business leaders, investors, and other critical stakeholders to brainstorm and explore partnership prospects.

The government of Godwin Obaseki has recorded a large number achievements under a period of four years. He has not left any stone unturned as he has impacted on all vital sectors, from the area of economic growth, education, infrastructure, health, agriculture, sports, development, and so much more.

in December 2018, the State government unveiled a security trust fund architecture with over N2 billion, and was codenamed “Operation Wabaizigan”. This move was meant to tackle herdsmen/ farmers clashes, kidnapping, cult-related killing and armed robbery in the state.

The government engaged in several reforms with a vision to transform the state’s sports sector, and help youths realise their potential, including the rebranding of Bendel Insurance and Edo Queens Football Clubs.

His administration also rebuilt the Samuel Ogbemudia Stadium and plans to build 20 mini stadia across the state to promote grassroots sports.

In a bid to deliver on his campaign promise of creating 200,000 jobs to address the problem of poverty, hunger, unemployment, and ever-rising criminality among youths, the Obasek-led government as of 2019 created over 157,000 jobs.

According to the governor, the Edo State Skills Development Agency (EdoJobs), has created direct and indirect jobs along its different intervention, with 3,434 through job matching and placement, 46,576 created through job tracking, and 22,872 from the skills development and entrepreneurship programmes.

Obasekiled administration in a bid to boost the educational sector of Edo State, implemented a new technique for teaching and high technology learning through a programme known as the Edo Basic Education Sector Transformation, EDOBEST.

The Edo-BEST programme, is designed for primary school pupils, with the aim of employing modern day technology like, Information and Communication Technology, ICT, tools in teaching. Over 11,356 primary school teachers were trained on digitallyenhanced technique for teaching pupils under the programme.

This was carried out in not less than 918 public primary schools across the three senatorial districts in the state, training over 11,500 School Based Management Committee (SBMC) members and distributing over 1,140,000 learning materials to pupils, while the total number of renovated schools were 243.