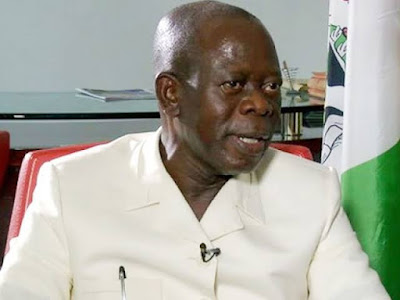 Adams Oshiomhole, The immediate past National Chairman of the All Progressives Congress, APC, has been advised to start getting prepared to relocate from Edo State.

This was made known by The National Coordinator, Concerned Advocates for Good Governance, CAGG, Olusegun Bamgbose, Esq.

Bamgbose, also commended the Independent National Electoral Commission, INEC, for a job well done while stating that the developments so far in the Edo governorship elections is satisfying.

“They certainly deserve a part on the back, for rejecting APC. This is no doubt a welcome development,” he said in a chat with DAILY POST on Sunday.

“I earlier predicted that APC will crash out and that is what is unfolding. This satisfying development, has clearly shown that there is hope for democracy in Nigeria.

“It’s no longer business as usual. It’s the dawn of a new era. Oshiomhole may be the hardest hit today after declaring the winner.

“He heavily invested in the election, but unfortunately he failed woefully. His political dynasty is gradually coming to an end. It’s advisable for him to start getting prepared to relocate from Edo State.

“Edo State has really inflicted him, with a wound that may not heal for a long time. Tinubu, on the other hand will eat his humble pie today.