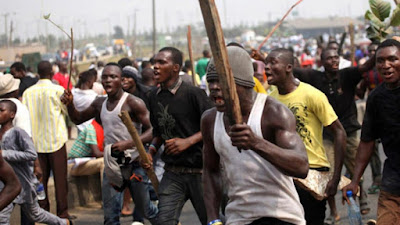 Reports are in that supporters of the All Progressives Congress (APC) and the Peoples Democratic Party (PDP) clashed Saturday morning in Edo amidst the ongoing governorship election in the state.

It was alleged that some APC youths attempted to share money but were resisted by their PDP counterparts.

The incident occurred at a polling unit in Oredo Local Government Area.

The footage of the incident shows members of the opposing camps rough handling one another.

According to the video, comments in the background suggest the cause of the clash has to do with money.

Only one policeman can be seen trying to control the situation.

Information teachingo me have it that these miscreants APC demons tried to share money at Oredo LGA, but were disrupted by PDP agents on ground and Edo people scattered the money. I love the good people of Edo State. #Protectyourvotes pic.twitter.com/v6gkpNiPCx