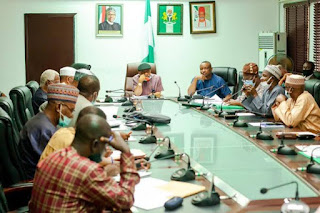 The Academic Staff Union of Universities ASUU resumes discussion with the federal government in a bid to tame the ongoing industrial action by the academic union. The meeting which was made public by the Minister of State, Labor and Employment via his twitter account came after the previous meeting held on 21st of October, 2020, ended in a deadlock.

In a meeting that was presided over by the Minister of Labor and Employment, Dr. Chris Ngige, centered on the mode of disbursement of the agreed funds, with the representatives of ASUU led by the president of the Union, Biodun Orgunyemi  preferring the University Transparency and Accountability Solution, over the Integrated Payroll and Personnel Information System favored by the federal government.

The meeting has been adjourned till next week Monday. This was necessary to enable the union leaders get back to their members about the federal government's proposed method of disbursement pending the roll out of ASUU's platform.  the spokesman of the Ministry of Labour explained.

Among other things, the government had agreed to pay N40bn, being the pending Earned Academic Allowance of the University teachers overdue since November, 2019. Out of the amount, N30bn would be paid on or November 6, while the remaining N10bn would be spread equally over two stranches to be paid in May 2021 and February 2022.

The two parties equally agreed to the planned release of N30bn for the revitalization of the educational sector.

The government offered to pay N20bn as funding for the revitalization of public universities by January 2021 as well as seek for sources of alternative and additional funding of the university system, among conclusions.

Its remains to be seen how ASUU will come to terms with the mode of disbursement.