#ENDSARS: Claim That UN Will Intervene After 30 Days Of Protest is Ingenuine

#ENDSARS: Claim That UN Will Intervene After 30 Days Of Protest is Ingenuine. 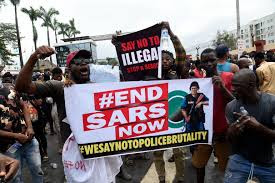 The claim circling round the social media that the United Nations is saddled with the responsibility of intervening in protests that exceed 30 days in a member state has been dubed fake and Ingenuine. The claim which originally upsurged from the Twitter page of a United Kingdom-based Nigerian doctor and influencer Dr Olufunmilayo Harvey Drew alot of attention and retweet. 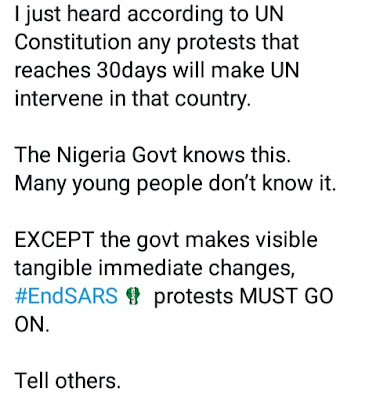 However, the claim is in contrary with the Article 2, Paragraph 7 which provides that the UN does not intervene in matters of domestic jurisdiction of any country. The document reads:
“Nothing contained in the present Charter shall authorize the United Nations to intervene in matters which are essentially within the domestic jurisdiction of any state or shall require the Members to submit such matters to settlement under the present Charter; but this principle shall not prejudice the application of enforcement measures under Chapter Vll."
The UN deals with issues that affect international well-being through its security council. Nothwitstanding, the original bearer, Dr. Harvey has retracted the statement which he claims he copied from the Twitter page of Folarin Falana popularly known as Falz.
“I saw it on Falz page actually. It was later I realised he deleted it after and I did same too.” the doctor and influencer said.
“I will send you the actual source. It’s not Falz or me. I don’t want to post it here before it starts getting retweets again.” he concluded.