Difficulties in Transportation May Delay Voting in Riverine Areas #OndoDecides2020

Difficulties in Transportation May Delay Voting in Riverine Areas #OndoDecides2020

As preparations are made for the Ondo State governorship election, some security personnel which includes policemen and members of the Nigeria Security and Civil Defence Corps are finding it difficult to navigate freely to their different destinations in the riverine regions of the state to carry assigned duties in the election. 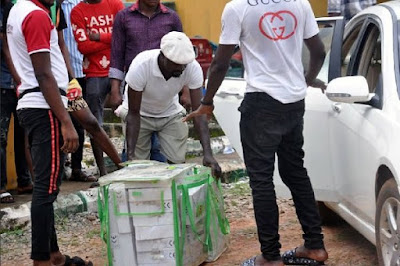 According to reports, these regions which are Ese Odo and Ilaje local government areas of Ondo State.

As a result of the difficulty in transportation, commercial motorcycle operators have hiked it's fare. A journey between Ajagba and Kiribo, which is the town of the Zenith Labour Party (ZLP) candidate, for instance, which normally cost between N100 and 150, attracted N300.

This development may delay the voting exercise in these regions if voters are discouraged from casting a ballot for their preferred governorship candidate due to transportation issues.

Voters and security personnel who had set out as early 5:00am to beat the restriction in movement at Ajagba in Irele local government area, which is the hub for communities Agadagba, Arogbo, Kiribo and Igbekedo were still stranded about one after, while making frantic efforts to reach their destination.