#ENDSARS: 4 Major Outlooks Of Protesters That May Seriously Affect Politicians

#ENDSARS: 4 Major Outlooks Of Protesters That May Seriously Affect Politicians 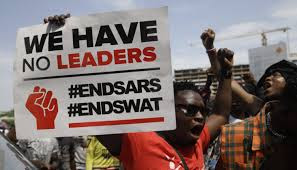 The sudden upsurge of a Nationwide protest fueled by the burgeoning rate of brutality by SARS officials, a unit of the Nigerian police force has overshadowed the government least expectation of a calm and reserved Nigerians. It is not surprising that the protest which was initially organized to campaign against police brutality has paved way for series of interwoven agitations largely owing to the support and determination of Nigerians both within and outside the country with top celebrities, politicians and philantropists joining the raging campaign. This article is a compilation of what the fresh outlooks of the protest entails.

BOGUS SALARIES OF LEGISLATORS: The clamoring of the people centers around this major contention. Despite the fact that Nigerians live on less than $2 (£1.51) per day, the Nigerian legislators are one of the most paid lawmakers in the world with Lion's share of their income generated from guaranteed allowances. According to Senator Sheu Sanni,  members of parliament earned as much as $480,000 (£361,610). Their monthly salary is only $2,000 (£1,512), but along with their monthly guaranteed expense allowance of $35,720 (£27,000) their salary becomes one of the best in the world. This is considered as a gullible act which is responsible for the underdevelopment of Nigeria. Further comparison between the budget allocated for the lawmakers' salaries and budget for education and some other sectors reveals how Nigerian government waste money that can be used to achieve greater goals. This is however a new dimension of the protest ongoing. SWAT OPERATIVES: Nigerians are edgy about this particular issue. They believe the disbanded SARS officials are the ones invoked to take over this agency which will not fill any void that Nigerians want to be filled. Nigerians are ready to go any extent and this might be a frustration for the politicians.

POLICE REFORMATION: This is another contemporary issue which the organized protest seeks to campaign against. Nigerians are pushed to irresistibly protest because of the incessant police brutality. To this extent, there have been Clarion call to some government officials to resign from their posts.

ASUU STRIKE: This is another dimension the protest seeks to explore, although there have been no action basically from the students, this is a potential way the protest may venture into if their wants are not fulfilled. After close to eight months of absolutely no academic activities, students are prepared than ever to fight their way back to school.

The massive protest is not likely to be called off any time soon although government have been deploying every Known method in order to ameliorate the protest which has now gained international recognition. The only possible way, with the look of situation is for the government to heed to the warnings and needs of the people.