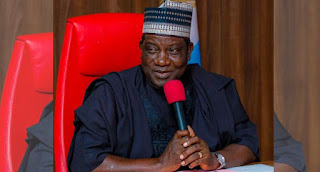 The Plateau State Government has refuted claims that the palliatives which were looted by hoodlums were hoarded by the government stating that the distribution of the palliatives was delayed due to the EndSars protest that took place across the country. The warehouses which is located at the Bukuru metropolis in Jos South Local Government Area, was broken into by the hoodlums who carted away the items.

According to a statement issued by the state Commissioner for Information, Dan Manjang, in Jos on Saturday, he explained that the items were delivered to the state by the  Federal Ministry of Humanitarian Affairs, Social Development and Disaster Management for distribution to beneficiaries in Plateau State. “Following the vandalization and looting of palliatives from some warehouses in Jos and Bukuru on 24th October 2020, it has become expedient for the Plateau State Government to condemn the action and further make some clarifications about the items to clear the erroneous impression that they were being hoarded,” he said.

He stated that the delay in the distribution of the items was because the team from the Federal Ministry of Humanitarian Affairs, Social Development and Disaster Management alongside the state representatives was waiting for the coast. He recalled that the Minister of Humanitarian Affairs Hajiya Sadiya Umar Farouk was in Jos together with the Minister of Women Affairs Dame Paullen Tallen on the 16th October 2020 to deliver the items and had indeed brought in the personnel of the Ministry to carry out the distribution in conjunction with State officials. “However, as they were preparing to begin the process, the #ENDSARS protests began which put the process on hold,” he said.

He concluded that it would be wrong and mischievous for anyone to suggest that the State Government was hoarding food items meant for indigent citizens. The Rescue Administration of Governor Simon Lalong will never tolerate that. Meanwhile, he appealed to the youths to conduct themselves and avoid any action that could cause the breakdown of law and order.