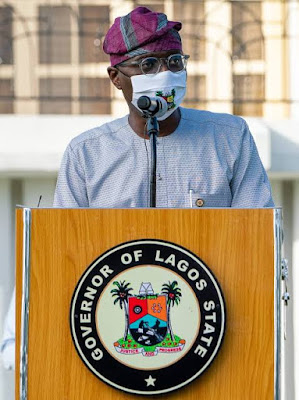 Lagos Democratic Coalition, which is known as a civil society organisation, has alleged that soldiers who carried out the killing and maiming of unarmed protesters at Lekki Toll Gate were ordered by the governor of the state.

According to the coalition, the soldiers involved were members of Operation MESA (known as OP MESA), which is a joint internal security outfit which is made up of military personnel drawn from the Army, Navy and Air Force.

The coalition, made this known in a statement signed by its Secretary-General, Henry Ojugbana Esq. and Comrade Senami Ojikutu, Convener.

The statement which was made available to DAILY POST stated that the Governor had complete control over this security outfit and the RRS (Rapid Response Squad) as the chairman of the Lagos State Security Council that comprises the Commissioner of Police of Lagos State Command, the commander 9th Brigade of the Nigerian Army, the Director of State Security Service in Lagos State as well as heads of the Navy, Air Force, FRSC, Civil Defence and LASTMA.

The Lagos Democratic Coalition said that the Governor’s order to violently dislodge peaceful protesters from the Lekki toll gate with lethal force was carried out by and in conjunction with the command instruction to the coordinator of OP MESA by the Commander of the 9th Brigade of the Nigerian Army, Brigadier General Musa A. Etsu-Ndagi (allegedly without prior notice to or approval from the military authorities) as well as ACP Tunji Disu, the Commander of RRS.

“It is mind-boggling that Governor Sanwolu would order the killing and maiming of the very citizen he swore an oath (and has a constitutional duty) to protect. It is indeed a sad irony that the protesters gathered at the Lekki Tollgate to protest against police brutality and bad governance in the country only to be slain and maimed by their own Governor.

“We know that the blockage of the Lekki Tollgate by the protesters caused significant financial loss to the Governor’s Godfather and benefactor who is known to have a controlling financial interest in Lekki Concession Company (LCC) – the operators and concessionaires of the Lekki Toll Road.

“Nonetheless, the flouting of curfew as well as temporary and minor injury to the financial interest of the Governor’s Godfather does not warrant and cannot justify the use of lethal and deadly force against unarmed protesters by Governor Sanwolu and his military and political collaborators.

“Governor Sanwolu’s inconsistent, conflicting and unintelligible explanations bare implausible denials with respect to who deployed the soldiers, snipers and armed policemen to the scene of the protest.

“We dare to say the Governor has been speaking half-truth on this matter. And as such, there are questions begging for answers: why the soldiers and policemen were deployed when the curfew declared by the Governor was yet to commence?

“Why the Governor had hurriedly imposed a curfew when there was relative calm in the state and without adequate prior notice?

“Why the CCTV cameras mounted at the tollgate were dismantled shortly before the shootings began and why the lighting and streets lights at the scene of the protest were switched off shortly before the soldiers and armed policemen arrived the scene of the protest and began shooting at protesters are the babbling of a guilty man trying to absolve himself of a heinous crime he knows full well he is guilty of.

“The Governor’s promise to investigate the killing and maiming of unarmed protesters at the Lekki Tollgate would be an exercise in self-deceit.

“Aside those injured and slain at Lekki Tollgate at the behest of Governor Sanwolu and their distraught families, all Lagosians are victims of Governor Sanwolu’s misguided and callous decision to attack unarmed protesters with lethal and deadly force.

“Our offices, houses, warehouses and shops have been looted and burned to the ground. Our lives, livelihoods and businesses have been grounded. Our streets and public spaces are burning, unsafe, polluted and have been taken over by criminals and hoodlums.

“Even our traditional institutions, such as the palace of the Oba of Lagos, were not spared. The destruction of the Oba’s palace is without a doubt a sad consequence of the Governor’s reckless judgment and callous disregard for human life even though the Oba of Lagos is unabashedly tainted politically and disconnected with the people that the youths of his kingdom did not rise in defence of their monarch’s throne and palace.

“We call upon Governor Sanwolu to own up to his involvement in and responsibility for the death and fatal injury of patriotic, unarmed and innocent young Nigerians who were protesting and fighting for a better Nigeria to the good people of Lagos State.