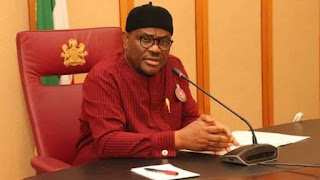 The Executive Governor of Rivers State  Nyisome Wike yesterday challenged the Nigerian media Editors to desists from praising public office holders. The Governor acknowledged the fact that editors are deviating from the core responsibilities of the media which is to hold public officers accountable.

He explained that the media holds an essential stake in developing a country by holding the  presidents, Governors, Chairmen, and other public leaders responsible and accountable for their actions and decisions.

He warns that if the media Editors continue to praise public officers with no commensurate reason for the praise, it will amount to nothing but share  sycophancy, which is highly detrimental  to the development of the nation.

“What I have seen of you is that you praise us and give us award because of relationship or friendship. That’s not the way it should be. Challenge us; the people in authority and we will sit up to our responsibilities. We will have no choice than to perform and serve the people, as it should be" the Governor said.

The Governor also condemned the cyber news that he is supporting IPOB saying that he cannot support a violent cause.