Gov. Wike Expresses Concern Over The Impunity Of Some Brutal Sars Officials And Pledges Support For Peaceful Protest. 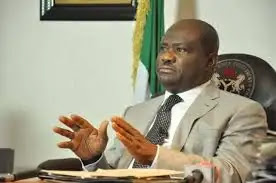 Amidst the ongoing #ENDSARS protest which has taken many forms, Governor Nyesom Wike of Rivers State has expressed his concern over the exclusion of some brutal Sars officials from facing the wrath of law. While addressing thousands of concerned women who identified themselves as “Concerned Mothers in Rivers State”, the Governor who was represented by his deputy, Dr. Ipalibo Harry Banigo said “As a Government, we feel your pains and this injustice most surely stop. To tell you the level of impunity, some SARS officers that were even caught on camera killing people were even promoted".

The Governor pledges his full support for peaceful protest while claiming that total reform of the police is the most viable solution. He recalled that the State was the first to raise an alarm in 2015 over the negative activities of SARS, but the Central government refused to acknowledge. He concluded “I want to thank you for the peaceful way you have conducted yourselves and assure you that we shall work together".

Speaking on behalf of the concerned women, Nollywood Actress,Hilda Dokubo said the protest was a crusade against the gruesome actions of the police and the dilapidated system of governance. She called for a new constitution which will cater for the welfare of the citizens.