Osun Lifts Curfew, Threatens to Impose Another if Protest Arises

Osun Lifts Curfew, Threatens to Impose Another if Protest Arises 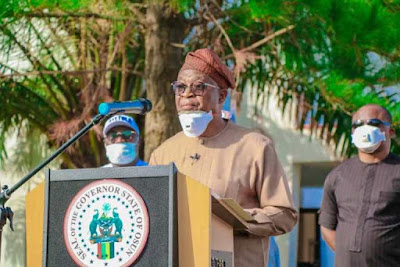 Governor Gboyega Oyetola of Osun State has lifted the curfew imposed on the state following the #EndSARS protest which resulted in the killings and destruction of lives and properties in the state.

The Secretary to the State Government, Prince Wole Oyebamiji, in a statement revealed on Friday that the decision was made after a review was carried out on the situation and following the inauguration of the State’s Judicial Panel of Inquiry on Police Brutality led to the suspension of the curfew in the state from today, Friday, October 23, 2020, till further notice. Recall that an attack was made on the Governor on October 18, 2020 in Osogbo, the state capital, by suspected political thugs who were said to have hijacked the protest which led to the killing of two people.

He added that the high level of compliance with the 24-hour curfew led to the end of the curfew in the state. He therefore commended the youths for displaying a high sense of maturity in carrying out their protest as well as the residents and citizens of Osun for their show of understanding and cooperation in the last 48 hours of the curfew.”

Oyebamiji added that, “The suspension is to allow members of the public to approach the Panel to make their submissions and to go about their lawful businesses.” However, he appealed with the youths to put an end to the protest and embrace dialogue with the Government as it is committed and determined to meet their demands; but warned that, “the government will not hesitate to reinstate the curfew should the need arise.”