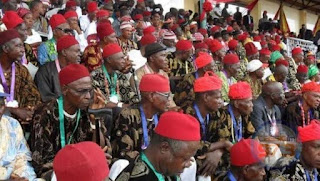 The leaders made this known via a communique arising from a meeting of the Movement for Actualisation of Sovereign State of Biafra, MASSOB, organization with the South East Governors, National Assembly members, South East clergy, Igbo leaders and women leaders, at Enugu government house on Friday.

According to the communique which was read by Comrade Uchenna Madu, the leader of MASSOB, on behalf of the people, also discussed issues related to herdsmen attack and other illegal activities done by the sect in the region.

They also made a request for the creation of one more State in the South East to balance the equation with other regions.

What are your thoughts on this, can we have an Igbo president come 2023? Let us know your views.