CAN Urge Nigerian Government, Listen To The Youth And Make Changes

CAN Urge Nigerian Government, Listen To The Youth And Make Changes 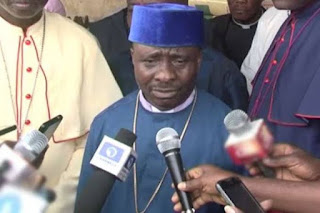 The #EndSAR protest which has been suspended has made leaders anxious in the nation, they don't know what to expect from the youth who were humble enough to evacuate the street after the deadly massacre that occurred at Lekki toll gate. Leaders in various sectors have been trying as much as possible to make sure that things never occur in the history of Nigeria.

This has made Mr Samson Ayokunle the president of the Christian Association of Nigeria (CAN) speak out to the federal government to look into the matter ot meeting the demands stated by the youth who engaged in the protest against police brutality cases happening all over in the country. The cleric noted that since the youth have cried out to the government, they shouldn't be discouraged but be rather positive towards the present situation of the country.

The #EndSAR protest's main purpose was to be the voice of the youth in oneness to create awareness of the police brutality on the citizen before the hoodlums hijacked it for their their own selfish interest of looting and vandalising government and citizens properties.

The notorious police unit (SARS) has been disbanded and a new reform is created in their stead. Although, multiple accounts of protesters are suspended, some have also been barred from traveling out of the country. Mr Ayokunle said in the ceremony of James Owoyemi in Akure, Ondo state that the youth should give the government time to make things right in the society