Looting In The Authority, Illegal 4.6 Billion Naira Swept Into An Official Personal Account By Fashola's Ministry

Government personnel has always been involved in different kind of dirty games with the public funds since the begin of time, although many ...

Government personnel has always been involved in different kind of dirty games with the public funds since the begin of time, although many a times they might be caught in this act. This has not stop other selfish and greedy ones to stop this act. Just like most ministerial which has a standalone ministry, ministry of power also is vested with such power to carry out efficient and necessary duties for the government.

As it could be seen that an illegal payment was made into a private account of some directors and employees who were formally in the ministry of power, works and housing in an obtain data shown by PREMIUM TIME. The records shows the sum of #4,608,394,262.22 was paid into the account of 2 private individuals accounts. When two-third of the allocated amount went to 2 men know as Ogueri Ugochukwu Pascal and Olasehinde Micah.

It was also noted that the ministry of power claimed that only 157 million naira was paid to 127 staffs within the period under review. The newspaper has it that this information claim to be untrue. Moreover, the two-third amount of money in the account of this 2 culprit was share as Mr Pascal was paid 1,642,407,539.93 while Mr Micah was paid the sum of 1,417,921,892,59.

Some other payment worth of 134 million Naira 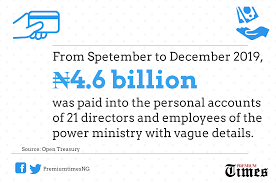 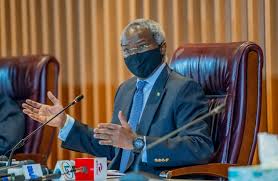 was also found in the account of one Adebowale Adebayo Kamoru who was acknowledged to be one of the NHP staffs in each of the geopolitical zones. As investigation is going on it was later detected that Micah, Pascal and Kamoru’s name were holding less info than what the filling payment to their account carries on the treasury portal. The minister in charge of the news forum claimed that these two are not even staffs at the ministry. The ministry has refused to say a word on the proposed accusation.