See What Ngozi Iweala Said After Being Opposed by USA as the next Director General WTO.

See What Ngozi Iweala Said After Being Opposed by USA as the next Director General WTO. 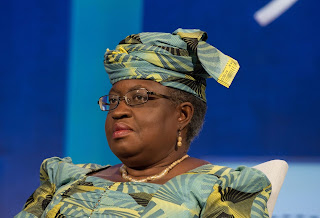 Nigeria's formal minister of Foreign Affairs, Dr Ngozi Ikonjo Iweala has responded to the USD disposition to rival her candidature as the next Director General of World Trade Organization WTO, giving reason, that the Nigerian born Economy stalwart is inexperience as far WTO  is concern.

In a rather professional manner, Iweala responded by commending every one across the globe who have seen reasons to support her for the Director General WTO. She continued by urging them to keep the support till the end.

"Many thanks @YuvanBeejadhur for your kind comments. Let me take this opportunity to thank my friends from all over the world for their continued support in the @wto DG bid. This, added to the support of my Nigerian sisters and brothers keeps the positivity going" she said.

It is understood that the 164 countries will sit with a resolution expected on the 9th of November.

It will remain to be seen on the outcome of the meeting.