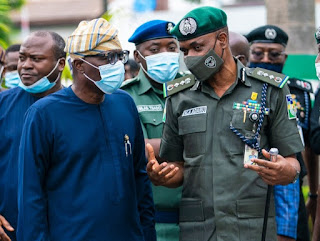 The Inspector- General of Police, Mohammed Adamu yesterday visited Lagos State House, Marina to commiserate with governor Babajide Sanwo-Olu on the destruction of public and privates properties, occasioned by the recent social revolt.

The IG in his message to the police  unit in Lagos, challenged officers to be strong and civil in their dealing social outbreak of this kind. He said that what police officers went through, during the protest is part of their job and should rather be strong having come out of it.

During his charge to the police, Adamu acknowledged, that any protest or social revolt without a leader has tendencies of resulting into crisis, which was just what happened

“The moment the protest organisers don’t have leadership, the purpose and intent of the effort will be defeated. As we have seen in the case of the #EndSARS protest, no economy will be able to bear the loss that we have seen in Lagos,” he added.